Melanoma is the most dangerous form of skin cancer. In its advanced stages, it can cause serious illness; if it spreads to the internal organs, it can even be life-threatening. Fortunately, melanoma rarely strikes without warning signs. Watch for them, because when melanoma is found early, it is almost always curable.

Moles, brown spots, and growths on the skin are usually — but not always — harmless. Anyone who has more than 100 moles is at greater risk for melanoma. The first signs can appear in one or more of these moles. That’s why it’s so important to know your skin very well. Examine the skin all over your body once a month and have a physician check you over once a year.

DYSPLASTIC NEVI (atypical moles) are noncancerous moles that can look like melanomas. They usually have the following characteristics:

SHAPE: asymmetrical: A line drawn through the middle would not create matching halves.

DIAMETER: generally larger than 6 mm (1/4 inch), the size of a pencil eraser, but maybe smaller.

LOCATION: most commonly on the back, chest, abdomen, and extremities; may also occur on areas such as the buttocks, groin, breasts, or scalp.

GROWTH: Enlargement of a previously stable mole or appearance of a new mole after ages 35-40 should raise suspicion.

MELANOMA, the deadliest form of skin cancer, usually appears as an asymmetrical, irregularly bordered, multicolored or tan/ brown spot or lesion that grows over time. In rare instances, it may be clear. 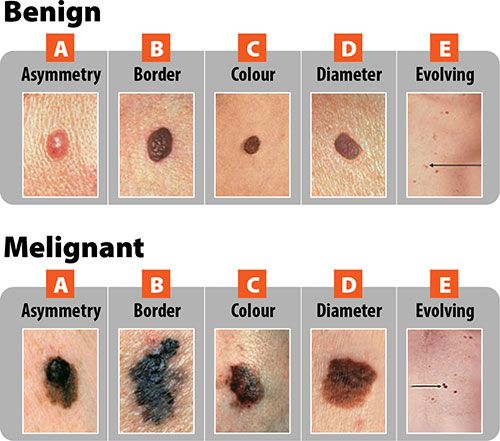 Book an appointment at our Fulton office.
Location & Hours

Email us using the form below we’ll respond asap or click here to book an appointment online now.If you prefer to speak with an expert via phone, call us at (301) 679-5772.